“I believe national schools should have fewer religious classes and more time devoted to English, mathematics and science subjects.

“We should not try to turn our students into ustaz and ustazah as there are already many of them.

“Religious classes should instead include ethics as an important component,” she said.

On Thursday, Minister in the Prime Minister’s Department (Religious Affairs) Senator Idris Ahmad said a Kafa Ihsan module would be introduced to all secondary school students in the near future.

Idris said the module was still in the final evaluation process by the Department of Islamic Development Malaysia (Jakim).

However, he said Kafa Ihsan would be an elective subject and that students were encouraged to take it.

“The teaching of Islam is about its delivery, proper practice and the imparting of knowledge,” she said.

Noor Azimah said it appeared that the proposed curriculum is linked to Jakim.

“This could breach some laws as Jakim does not have any jurisdiction nor presence in schools.

“The teaching of Islam as we know is state-controlled under the Islamic Religious Council and as such, should not be allowed to encroach into the Education Ministry’s timetable,” she said.

Noor Azimah also said the announcement was “highly suspect” as it did not come from the ministry.

Melaka Action Group for Parents in Education chairman Mak Chee Kin said he is “lost for words” with the proposal.

“I hope the Education Ministry will reconsider this proposal. There are already many concerns that our schools are too religion-orientated,” he said.

A parent, who wanted to be known as Noor, said having the Kafa Ihsan module in schools is fine so long as it remains an elective subject.

“I think it is time the government introduced more science-based subjects in schools because this (Kafa Ihsan) is not necessary.

“Science subjects are more beneficial for the students’ future,” added the Parent-Teacher Association (PTA) chairperson for a secondary school in Kuala Lumpur.

St Xavier’s Institution PTA chairman Victor Tan urged the ministry to introduce modules that are relevant in a post-pandemic world. 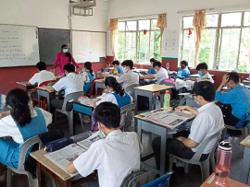