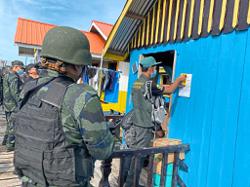 PETALING JAYA: Public awareness and participation towards stopping the construction of buildings without prior approval from local authorities is required to achieve climate resilient development for Malaysia, says the Association of Consulting Architects Malaysia (ACAM).

In a statement Friday (Jan 21), ACAM urged the public to adopt a positive mindset towards embracing this concept as the way forward for the nation, especially considering the aftermath of the devastating floods in December 2021.

"As long as the public continues building illegal structures on private lands without the approval of the local authority, the goal of reaching climate resilience will remain distant for decades to come.

"This is because such structures are often built without consulting experts or allied professionals to create sustainable and energy efficient structures," said its president Jafri Merican.

Jafri added that when issues such as site stability, drainage or traffic accumulation, among others, remain unresolved, they have the potential to exhibit far reaching consequences on the ability of urban and rural areas to cope with the adverse effects of climate change.

"Additionally, many unplanned and ad hoc drains are also not effectively connected to the monsoon drains, resulting in puddled areas and clogged outlets in the existing drainage infrastructure," he said.

ACAM vice-president Bobby Low elaborated that there were strict regulations already set in place, of which the public may not have been aware of.

Immediate past president Jasmeet Singh Sidhu, however, said that imposing fines and policing would only go so far in preventing the public from such illegal practices.

"It is important to inculcate public awareness that illegal construction along with the irresponsible disposing of waste will result in a situation where infrastructure becomes unable to cope with exceptionally inclement rainfall.

"Therefore, establishing a culture of civic mindedness is the way forward towards achieving climate resilience for our country," said Jagmeet.

ACAM is a registered national-level organisation representing the collective interests of architectural firms practising throughout Malaysia.

Its primary focus is to address issues and challenges faced by its members, particularly in matters relating to the business and practice of architecture.