IPOH: All local councils and agencies involved must regularly check the conditions of drains and other water outlets to prevent flash floods especially during the rainy season, says Datuk Seri Saarani Mohamad.

The Perak Mentri Besar said the public should also take the initiative to clear any obstacles in drains they come across that could block the flow of water, instead of waiting for the authorities.

“With the monsoon season now, a daily inspection must be carried out by the local councils, the Public Works Department as well as the Drainage and Irrigation Department.

“This can prevent flash floods if clogged drains are cleared much earlier,” he told reporters after delivering his Executive Talk at the state secretariat building on Thursday (Jan 20).

On Wednesday (Jan 19), several areas in Ipoh were hit by flash floods, causing houses to be flooded with furniture and many other items destroyed.

The continuous rain from 6pm to 9pm, created havoc at several housing areas in Taman Cempaka, Bercham, Tasek and Ampang among others.

Saarani said proactive steps were very important and reiterated that daily inspection and clearing works must be carried out without fail.

Citing an example, Saarani said if members of the public come across plywood in a drain near their houses, they should quickly remove it.

“This will help with the water flow, which indirectly prevents flash floods at the housing area.

“If we stick to the mentality that it is not my job, it will not only affect one person but many others,” he said.

In his speech earlier, Saarani said Perak was not affected much by the massive floods at the end of last year, unlike many other states.

However, he said they must be on the alert and prepared to face any possibilities of extreme disasters in the future.

“It is not just for us to be prepared in terms of infrastructure but also how to manage disasters and more sustainable development to withhold the impact of climate change.

“We must not forget in 2014, Perak was hit with one of the worst floods, causing major losses to the state and the people,” he said.

Saarani also said mitigation measures must always be in place, with attention on the early warning system and mobilisation of disaster management assets.

“We may have adequate warning systems and assets but it needs to be followed up with a structured mitigation plan with regular simulation exercises and proper training to frontliners.

“Structural issues and bureaucracy must also be addressed which have been preventing us from achieving the potential of better services in crisis management, leading to frustration among the people.

“Government machinery needs to strengthen its synergy and coordination in managing crises and disasters with agencies given flexibility according to their respective capacities,” he said. 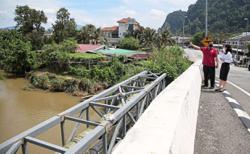