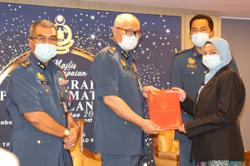 KUALA LUMPUR: Malaysia is in a climate emergency and immediate action must be taken to manage the impact of the situation, says Syed Saddiq Syed Abdul Rahman.

The Muar MP said there needs to be a national urgency not only from the Cabinet and political parties but also from all relevant stakeholders to look into the matter seriously.

"The issue of climate change is no longer a small issue in Malaysia, but it must be recognised as a national issue, that must be considered seriously by all political parties, leaders, corporate bodies and others.

"It means there must be a national emergency in the sense of urgency for all ministries, political leaders even, to raise their ideas to solve the issues via a system of bipartisanship so, in the end, all the weaknesses will not be repeated," said the Muda president in Parliament on Thursday (Jan 20).

"In one week's time, an estimated RM6.5bil worth of losses were recorded. The amount if we inject it in our economy, it can generate at least 300,000 job opportunities," he added.

He also listed several proposals including enacting the Climate Change Act, addressing the logging issues as well as forming a specific Parliamentary Select Committee (PSC) on climate change, in order to address those challenges more sustainably.

He also expressed his shock when he visited Pahang, where brick houses were completely destroyed from fallen trees due to logging.

"Can you imagine if it is your own family members who got stuck in between those fallen trees, which came right in front of you?

"It is unbelievably scary. We need to set up a proper commission and inquiry to look into the issue of logging.

"And the outcome must be brought to Parliament in a clean and transparent manner," he said.

He also urged for a moratorium on logging until the issue is settled and authorities must force owners of logging companies to pay compensation to the flood victims.