Dr Wee: Marine engineering a vast field with many opportunities 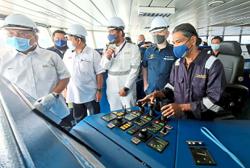 PETALING JAYA: More youths should venture into the field of marine engineering as there is high demand, both locally and abroad, says Datuk Seri Dr Wee Ka Siong.

The Transport Minister said it was a vast field with many opportunities for those planning to enter it.

Dr Wee said this during a working visit to Kemaman Port in Terengganu and onboard Inai Kenanga, a trailer suction hopper dredger (TSHD) to see the dredging work.

"During the official working visit to Kemaman Port, I also had the opportunity to board Inai Kenanga to see the dredging work led by Capt Sharani Fitri with his first officer, Sam Nur Arif.

Dr Wee said Inai Kenanga was a Malaysian vessel built in Pulau Indah in 2013 using local expertise together with those from Europe, Japan and Korea and subsequently commissioned in 2016.

"It is well-known that IMW is a wholly bumiputera-owned company that has expertise in marine engineering and has over 20 years of experience in marine dredging and reclamation work.

"Since it started operations, Inai Kenanga has successfully completed 18 dredging projects," he said, adding that the vessel had a dredging waste material capacity of 33,300 cubic metres.

"It is the largest TSHD in Asia and the 3rd largest in the world, also the most advanced with the latest equipment," he added.

Dr Wee noted that the Malaysian government had entrusted IMW to a 15-year concession to carry out reclamation and dredging works at all major ports nationwide, as well as all port projects involving Federal funds.

"This concession agreement is a continuation of the previous one that was inked for 15 years from 2004 to 2019," he said. 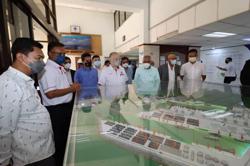