KOTA BHARU: The Kelantan government has denied claims that logging activities in the state have forced tigers out of their natural habitat and into the Orang Asli settlements in Gua Musang.

This follows an incident on Friday (Jan 7) when an Orang Asli man was mauled to death by a tiger in Kampung Sau near Pos Bihai.

Kelantan Deputy Menteri Besar Datuk Mohd Amar Nik Abdullah said a study should be conducted by the relevant parties to determine the factors that caused the mammal to come out of its natural habitat.

He claimed the incident of a tiger trespassing into a village in the state was not new as the sighting of the animal had been reported in the Jeli district, and that the incident was never linked to the state’s logging activities.

"This incident is an isolated case. If there are many cases, then it can be said due to logging. We cannot say it is because of deforestation for a tiger to attack and kill a person, but, if there are three or four tigers that encroach into a village then it is serious,” he told reporters after the state executive council meeting at the Kota Darulnaim Complex here on Wednesday (Jan 12).

He said this in response to a claim by an Orang Asli representative from the Temiar tribe, Nasir Dollah, 32, that human-wildlife conflict, especially of tigers trespassing into the Orang Asli villages in Pos Bihai, occurred due to the Kelantan government’s action in approving large swaths of forest areas for logging and other activities.

They blamed the recent fatal attack by a tiger and several sightings of the mammal near Orang Asli villages in the district on logging activities that caused wildlife to lose their habitats.- Bernama 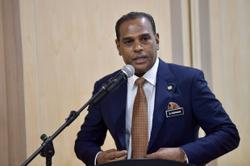