Back to school with joy and jitters

By GC TAN and IVAN LOH

ALOR SETAR: For once, Suliza Abdullah did not have to make too much of an effort to wake her children up for school.

They were wide awake at the first ring of the alarm bell, raring to go to school yesterday.Suliza, a 36-year-old food stall operator, marvelled at how fast her daughters Nur Safiyya Amanda Mohd Hafizad, nine, and Nur Qisya Azzalea, seven, got ready.

“They were eager to meet their teachers, whom they haven’t seen in so long.

“During the school holidays, they attended home-based classes. I made a ‘Mama Daily Notebook’ to monitor their homework. I wrote down all their homework and sent it to their teachers.

“Now, all they care about is meeting those teachers,” Suliza said with a laugh.

“Since early morning, I have been busy handling my children and sending them to school while preparing nasi lemak.

“My children have been in a chaotic mood since Saturday evening, wanting to go to school. They woke up at 6am,” she said. 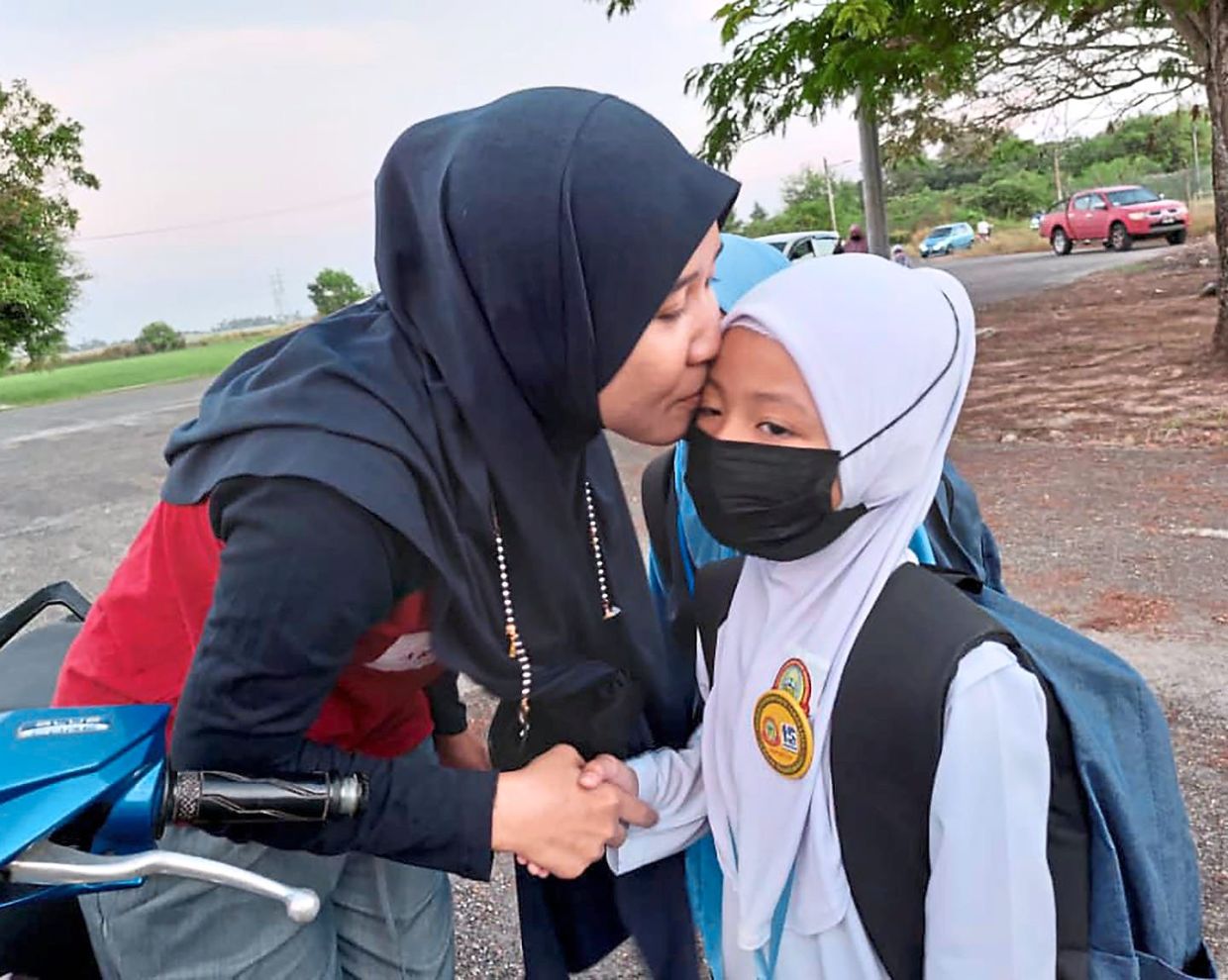 “I have many things to worry about like Covid-19, but he really wanted to go to school,” said Punithekumaran, whose son Yathavan studies at SJK(T) Thiruvalluvar.

In Taman Aman, seven-year-old Muhammad Fathi Khalish suddenly decided that he did not want to go to school – right at the gates.

He broke down in public and gave his father, 34-year-old fireman Mohd Fahmi Mohammad, a hard time.

These were among the endearing scenes of kids returning to school in Perlis and Kedah amidst the Covid-19 pandemic.

“Years Three, Four and Five pupils are under rotation. The school recorded a very good attendance of nearly 90%,” he said.

In Ipoh, bank officer YB Leong bought slightly bigger school uniforms for her children in 2020 with the hope that they could last for at least two years.

Since her children, aged six and eight, remained at home for most of last year due to the pandemic, the uniforms still looked new and she did not need to get new ones for them this year, she said.

One school uniform set, comprising a shirt and pants, cost Leong about RM60.

“I bought three sets each for both my sons and that already amounted to RM360. I spent another RM60 on two pairs of shoes.

“I managed to save RM420 this year as the uniforms and shoes still fit my boys,” she added.

Leong said before the pandemic, she would get new uniforms for her eldest son for every new term.

“As for schoolbags, it is better to invest in sturdy and good-quality ones. Some may cost up to RM500 depending on the quality and size, but they can last for a long time if properly maintained. “I bought a bag with wheels for my eldest son and it has lasted him three years,” she added.

As for books and stationery, Leong said these were not required yet as the school syllabus for 2022 had not started.

“The 2021 syllabus will end in February. My sons are borrowing textbooks from the school, so they will only be buying some exercise books and stationery later,” she said.

“We also bought slightly bigger uniforms although he didn’t get much of a chance to wear them during the movement control order period.

“He can still fit in some older uniforms, so it’s all good for now,” he said, adding that his son had outgrown his shoes.

In Seremban, self-employed Muhammad Hariz Ramesh Pillai Abdullah 56, only bought a pair of shoes each for his three schoolgoing children, adding that prices had increased by between 30% and 50%.

“I only bought the shoes as their school uniforms and bags are still in good condition. The shoes, which used to cost over RM20, are now priced at RM30,” he said.

Shop assistant K. Suresh, 59, said friends told him that the prices of uniforms, bags and shoes had also gone up.

“My daughter needs a new bag, but I have decided against buying one for now.

“There’s a huge outlet in Seremban which sells these items and I will buy them when it holds its back-to-school sale,” he said, adding that the sale, which used to be held before the new school term each year, did not take place this time around.

Suresh said although price hikes were unavoidable, the authorities needed to do more checks to ensure there was no profiteering.

Housewife K. Valarmathy 50, whose son is in Form Three, said school items were already costly when she bought them last year.

“However, I bought my son a pair of football boots for school which cost me more than RM200,” she added.