PETALING JAYA: Pahang has issued a temporary stop-work order on timber logging in the state due to the flood situation, says the state Forestry Department.

In a letter issued by its director Mohd Hizamri Mohd Yasin, the stop-work order came into effect on Jan 3.

The letter, titled “Temporary Stop Work Order On Production of Forest Products and Transportation of Logs During The Monsoon Season and Flood 2022”, was to inform industry players on the state’s decision from Jan 3 until further notice.

“Please be informed that the Pahang Forestry Department has made a decision to temporarily cease all production of forest products and production of timber from logging areas in Pahang starting Jan 3, 2022, until further notice.

“You are requested to take immediate action according to this order, to lessen the impact on production areas and also the safety of workers.

“Action will be taken against licence holders violating this order, which can be charged under the National Forestry Act 1984,” read the letter.

Many locations in Pahang are flooded due to the monsoon season, with logging believed to be one of the contributing causes. 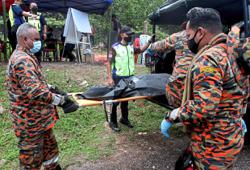 Farms shut down because of small chicken size, not protest, says ministry
INTERACTIVE: Malaysia’s annual durian season kicks off in Penang. Here’s what you need to know
McDonald’s Malaysia honours extraordinary teachers
AG’s power may be clipped
Zoos are thriving once more
Durian prices expected to drop in June
Nurses being lured away
‘Govt must also be held accountable’
Public fuming over another likely data leak
Supplier: Chickens too light to be sold