Teaching in Tamil and Mandarin in vernacular schools is constitutional, High Court rules

KUALA LUMPUR: Teaching in Tamil and Mandarin in vernacular schools is constitutional, the High Court here has ruled in dismissing a lawsuit seeking to put a stop to the existence of such educational institutions.

In its ruling on Wednesday (Dec 29), however, the High Court held that vernacular schools in the country were in line with provisions enshrined in the Federal Constitution that protected the usage of mother tongue languages in teaching.

Justice Datuk Mohd Nazlan Mohd Ghazali said the plaintiffs had not succeeded in showing how their rights were constitutionally infringed by vernacular education.

He added there was no indication whatsoever that the existence of vernacular schools had violated anyone’s rights and fundamental liberties.

According to Justice Mazlan, it was not an offence to teach in any language other than Bahasa Melayu which was stipulated in Article 152 (1) (a) of the Federal Constitution.

He added that vernacular schools were also covered under the Education Act 1996.

The plaintiffs had, among others, claimed that vernacular schools were unconstitutional and violated Article 152(1) of the Constitution which stated that Malay was the national language.

The 13 defendants named in the suit included the Education Ministry, education minister as well as MCA, MIC and Gerakan. 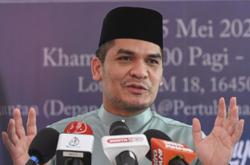