PETALING JAYA: A secret plan for the Sulu militia to invade Sabah is believed to have been hatched in the southern Philippines.

According to the South China Morning Post, a secret meeting of 19 mayors was held to discuss recruiting 600 men to invade the state and sending spies to scope out coastal towns.

It is learnt that the meeting was arranged by a senior local government official in the southern Philippines.

A senior regional security source told the Post's This Week In Asia magazine that the meeting was held on Dec 1 by a locally-elected official of Sulu province who gathered mayors of the Sulu Archipelago to discuss plans to set up a “Royal Sulu Army” to invade Sabah.

“The potential of the plan coming to fruition depends on how much political support and funds it can get from various parties.

“Many stakeholders in the Philippines and abroad are willing to exploit this issue for their respective political and strategic interests,” the source said.

The source added that February 2022 was seen as the best time to invade to “commemorate” the Lahad Datu incursion in 2013.

The source also said the implementation of the plan was prompted by the failure of the heirs of the Sulu Sultanate to obtain the consent of the Malaysian government to settle proprietary rights over Sabah.

It was reported that out of the 19 mayors who attended the secret meeting, 11 agreed to the plan while the rest sat on the fence, neither agreeing to nor rejecting it.

“Each mayor is expected to provide 50 men who are skilled and brave in battle.

“The cost of ammunition and other logistics is to be borne by the high-ranking official who also promised to contribute 500,000 pesos (US$10,000) to build 100 speedboats that will be used to attack Sabah,” the source said.

According to the source, the local official was believed to have supplied 500 firearms to local representatives in Sulu who would then distribute them to the militia.

The source also said 150 to 200 spies from Sulu were expected to be directed to Lahad Datu and Semporna – two key coastal towns where an invasion force might land.

“All the Sulu soldiers entering the waters of Lahad Datu and Semporna (in the new invasion plot) will be bringing in firearms,” said the source.

“The firearms will be buried in an area before being used to attack (targets).

However, the source added that "no one" had infiltrated Sabah yet but warned that the Sulu plotters had sleeper cells there.

The security source said intelligence gathering and security had been stepped up in Sabah since the discovery of the Sulu meeting.

The sovereignty of Sabah is the source of a long-standing dispute between Malaysia and the Philippines.

In the Philippines, feelings are especially strong in the Sulu Archipelago, from where previous failed attempts to invade have been launched. 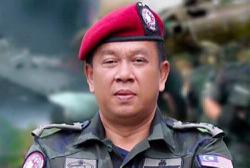