By ASHLEY TANG and ILI AQILAH

PETALING JAYA: Muafakat Nasional was not formed with the intention of Parti Pribumi Bersatu Malaysia to be part of it, says Umno deputy president Datuk Seri Mohamad Hasan.

“Umno has never violated the Muafakat charter. To my friends in PAS, let us not forget that Muafakat was not formed with the aim of Bersatu to be part of it.

“In fact, one of the reasons Muafakat was formed was to oppose Pakatan Harapan. Bersatu was part of the Pakatan component then.“As such, to force Umno to accept Bersatu contradicted the real spirit of which Muafakat was formed. What more when remembering how Bersatu had worked with DAP to oppose us and topple the Umno-led government,” he said in a statement.

Sinar Harian reported that Hadi had rejected the pact as Umno did not follow the charter that was agreed upon.

Hadi said the charter stated the pact could accept other parties, including Bersatu, but certain factions in Umno only wanted to cooperate with PAS.

Mohamad acknowledged Muafakat’s role was to protect all Malays, but noted those who wanted to join Muafakat must be aligned with the interests of Umno and PAS.

“The Muafakat charter has to be interpreted in line with the current Umno and PAS political realities. That is why Umno has never invited PKR, Amanah, Putra or Pejuang to join Muafakat even though they are part of the ummah.

“To be honest, it is because Umno does not want to offend PAS,” he said.

Mohamad said PAS and Malaysia as a whole were aware that Umno members would not work with Bersatu.

“Just because Umno did not accept Bersatu, PAS abandons Muafakat. The interest of the Malays and Islam are far greater than the interest of Bersatu joining Muafakat.

“I hope the PAS president will continue to be together with Umno in exploring various new dimensions in developing Malay empowerment,” he said.

The Muafakat charter, signed on Sept 14, 2019 by PAS and Umno, among others, agreed on cooperation for the development of the Islamic and Malay narrative without denying the diversity of religion, race and culture as central to the political stability, racial harmony and peace of the country.

However, in Aug 20 last year, PAS officially joined Perikatan Nasional as a component member, which triggered uneasiness among Umno grassroots.

However, in Ipoh, Datuk Seri Ahmad Faizal Azumu said the ball is still in Umno’s court on whether they want to work with Bersatu.

The Bersatu deputy president said there was still time to cooperate but Barisan Nasional would need to take the first step.

“For me, there is no time restriction for us to do good. If we really want to do good, God will line the path for us,” he said during a press conference after opening the national-level Volunteers’ Day yesterday.

Ahmad Faizal, who is Youth and Sports Minister, added that Bersatu did not want to be like uninvited guests.

“If they really want to focus on working together, they should do more than just talk.

“I believe the people understand the current situation. Bersatu is preparing with our friends from Perikatan though we are still committed to the government under (Prime Minister) Datuk Seri Ismail Sabri Yaakob,” he said.

“It is up to Umno to invite us. If someone organised a feast but didn’t invite us, it is okay.

“We have rice at home that we can still cook and eat together with eggs and soy sauce,” he said. 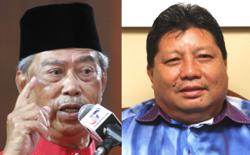