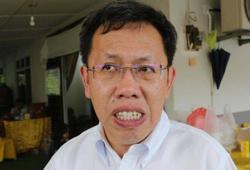 KUCHING: At least seven candidates are expected to vie for the Dudong seat, making it one of the most highly contested seats in the Sarawak state election.

At least two independent candidates, Engga Unchat and Fadhill Mohamad Isa, have said they also intend to contest the seat.

Dudong, in Sibu, is one of the seats to watch in this election not only for the multi-cornered fight but also because it is being contested by Progressive Democratic Party (PDP) president Tiong for the first time.

PDP is one of GPS’ four component parties.

Sarawak United People’s Party (SUPP), another GPS component party, had expected to contest in Dudong but the seat was given to PDP instead.

Political analyst Dr Hii Sui Cheng said that two GPS component parties were staking a claim for the seat because Dudong does not traditionally belong to any party.“Support for the opposition candidates will be split. I see Tiong has the best chance to win as he has the resources and good machinery to capture the seat for GPS,” he said.

Bawang Assan is another seat to watch, said Hii, as its incumbent since 1991, Datuk Seri Wong Soon Koh, will be contesting as an opposition candidate this time.

“As PSB (Parti Sarawak Bersatu) president, it will be interesting to see if he could garner the same support as when he was in the government,” he said.

PSB was formerly GPS-friendly but became an independent opposition party in 2019.

University of Tasmania Asian Studies Prof James Chin said it was a smart move by DAP to field Yii as he is a popular MP and has good rapport with younger people.

“Batu Kawah will be a difficult seat to win but Yii will give Dr Sim a real run for his money,” he said.

Krian is also a seat to watch if its incumbent Datuk Ali Biju of Bersatu contests as an independent.

His party has decided to sit out the polls and, apparently, Ali is not too happy with the decision.

Another seat to watch is Ba’kelalan where two-term incumbent Baru Bian will defend the seat on a PSB ticket this time.

He had previously won as a PKR candidate and is likely to face a five-cornered fight with GPS’ Sam Laya, PKR’s Martin Labo, PBK’s Peter Asut and Agnes Padan, who quit as Sarawak PKR’s Wanita chief to contest as an independent.

All of them are from the Lun Bawang community, the predominant ethnic group in the area.