KUCHING: Barisan Nasional has officially informed Gabungan Parti Sarawak that it will not contest in the state polls and will not allow anyone to use its "dacing" (balancing scales) symbol during the campaign period.

"As long-time friends, we will give our support morally and in spirit to GPS," he told a press conference on Saturday (Dec 4).

Mohamad said since Barisan was not contesting, no one would be allowed to use its logo in the polls.

"We are not friendly to any other group or party in this election. Our support is only for GPS," he said. Barisan, he said, would report any use of its logo to the Election Commission.

Asked if Barisan would help GPS' campaign, Mohamad said they had a strong and well-oiled machinery.

"They have been running many elections and GPS' machinery is well known for its efficiency.

"If they want our help we are always ready to lend a hand, but for now we will not help their campaign," he said. 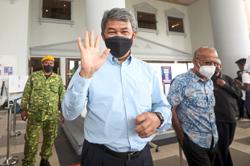