PUTRAJAYA: Datuk Seri Najib Razak wants his lawsuit over alleged mismanagement of his accounts to be reinstated against AMMB Holdings Berhad, AmBank Islamic Bhd and its former customer relationship manager, the Court of Appeal heard.

His lawyer Harvinderjit Singh submitted in the appeal before a three-member panel that High Court judge Datuk Khadijah Idris made erroneous findings of facts and inferences, when she decided that the suit was unsustainable.

He said the suit filed by his client was not a "collateral attack" on his (Najib's) SRC International Sdn Bhd criminal case, as was decided by the High Court judge when she struck out the suit.

Collateral attack means legal action to challenge a ruling in another case.

In her decision, the High Court judge held the suit was an abuse of the court process as it amounted to a collateral attack on Najib's SRC criminal case because in the suit, the court is required to adjudicate on Najib's knowledge of monies paid into his account which was the same issues before the criminal court in the SRC case.

The former prime minister is appealing to the Court of Appeal, seeking reinstatement of his lawsuit which was struck out by the High Court.

Harvinderjit Singh said the High Court judge was wrong in finding that the suit was anchored on Joanna Yu Ging Ping's testimony in the SRC trial which was purported to be protected by absolute immunity.

Yu was one of the prosecution witnesses in the SRC trial, where Najib faced seven charges relating to the alleged misappropriation of RM42mil of SRC funds.

The Court of Appeal heard Najib's appeal for 15 days in April this year and the court has fixed Dec 8 to deliver its verdict.

On his suit against AmBank, AMMB Holdings and Yu, Najib contended in his statement of claim that AmBank and Yu had committed negligence when handling his bank accounts by disclosing them to Jho Low.

Najib claimed that AmBank, AMMB Holdings and Yu, without authorisation, had disclosed his bank statements, debit and credit remittance transactions, and balances of funds of one of his accounts to Low as the third party.

The court also heard submission from lawyer Datuk Dr Gurdial Singh Nijar representing Yu, a former customer relationship manager, in saying that she was not the contributing factor that lead Najib to be charged with seven counts of charges related to SRC.

He said that it was not Yu's decision to charge Najib but it was the decision of the Attorney-General, the then attorney general (Tan Sri Tommy Thomas).

He submitted that the High Court judge was right when she ruled that the suit was a collateral attack as it may result in conflicting and inconsistencies of fact findings on the same issues. 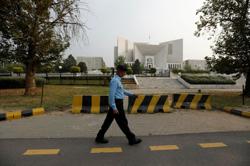