IPOH: The grand dame of the Indian textile industry, VKK Ammani Ammal (pic), who died here at the age of 92, is remembered for helping to build up the family business and for being a loving “iron lady”.

The Perak-born great-grandmother had been the force behind her late husband, VK Kalyanasundram, from the time they had set up a sundry shop in Slim River in the 1940s to the opening their first textile business here in 1945.

Ammani, who had 11 children, and 73 grandchildren and great-grandchildren, passed away peacefully in her sleep early Thursday morning.

As the saying goes “behind every successful man, is a supportive/strong woman”. Ammani had definitely fit the bill – she assisted her husband in the growth of their textile company, Syarikat VK Kalyanasundram Sdn Bhd.

In a full-page obituary ad in The Star yesterday, the family called it “A Heartfelt Tribute to Our Iron Lady”.

One of her grandsons, VKK Rajasekaran, 43, said his grandparents decided to go into the textile business as the demand for Indian garments had increased with the migration of many from India who were working in the country then.

Rajasekaran said it was not wrong to say that his grandparents had started the pioneer textile business here in Jalan Lahat, where Little India is located.

The first textile shop that they opened was in Ipoh, followed by another in Teluk Intan.

The business then expanded to Kuala Lumpur, Penang and Singapore, he added.

As his grandfather travelled frequently for business overseas, his grandmother not only took care of the family, but ran the local businesses as well.

“Despite her age, she never gave up working and running the family business until the last 10 years, when she decided to let some of her children and grandchildren handle the business fully,” he said.

Describing his grandmother as the family’s pillar of strength, Rajasekaran said all of them uphold the values instilled in them, which they continue to practise until today.

“She loved her children, grandchildren and great-grandchildren unconditionally. She always showed equal affection for all,” he added.

Textile business aside, the family-run venture also operates in the palm oil and hospitality industry, among others.

One of her grandchildren is Little India Traders Association chairman B. Kalyani.

Ammani’s funeral will be held today. The last rites will be performed from 9am to 11am at her residence at No 12, Jalan Tun Perak, before the cortege leaves for cremation at the Ipoh Buntong Crematorium in Jalan Madras. 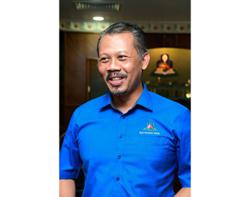