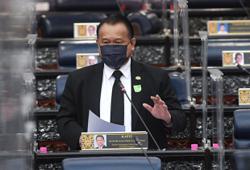 He said three types of vegetables were found to be sold at higher prices, based on inspections of public markets in the state - green beans at RM15-RM17 per kg (an increase of about RM3 per kg), imported round cabbage from RM4-RM5 per kg to RM5-RM7 per kg, and red bird’s eye chili from RM13-RM15 per kg to RM15-RM20 per kg.

"Inspections also revealed that vegetables were much cheaper in supermarkets compared to those sold in public markets," he said in a statement Saturday (Nov 27).

The department was also monitoring 186 types of products at 41 markets, as well as 31 supermarkets and hypermarkets in the state daily, he added.

He said the department had issued 46 GIVN and five written notices to vegetable traders throughout the year to provide information regarding increases in prices.

Also, the state enforcement section conducted 47,578 price-related inspections, resulting in 373 cases under the Price Control and Anti-Profiteering Act 2011, with RM46,850 in compounds, he said.

"A total of 374 GIVN and 139 written notices were issued to traders to obtain information over the increase in product prices," he added. - Bernama