MELAKA: Barisan Nasional has won the Pengkalan Batu seat in a five-cornered fight with a razor-thin majority of 131.

Former rep, Norhizam Hassan Baktee, only has 1,218 seats and has lost his deposit.

Norhizam won the seat in GE14 when he was with DAP, before turning Independent in 2020.

The fifth candidate, Mohd Aluwi Sari of Perkasa, also lost his deposit after securing only 82 votes.

With the latest results, Barisan won 21 seats out of 28 it contested. 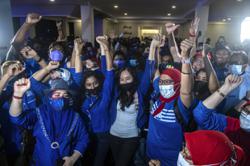