Sulaiman won with a majority of 3,104 votes over Perikatan Nasional's Abdullah Mahadi with 1,382 votes and Pakatan Harapan's Mohamad Asri Ibrahim with 1,155 votes.

The EC also announced that Barisan won in Durian Tunggal and Merlimau. 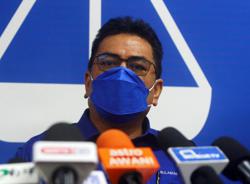