THE Malayan Tiger, a national symbol, is expected to become extinct within the next decade if nothing is done to save them, said Datuk Seri Dr Wan Junaidi Tuanku Jaafar.

“The Malayan Tiger is under threat of extinction. Data shows that the tiger population is at a very worrying level.”

He said data from the first National Tiger Survey 2016-2020 revealed that there are less than 200 tigers left in the wild.

“Based on these figures, we will lose the species within the next five to 10 years if no extraordinary action is taken to save them,” said the Minister in the Prime Minister’s Department.

He was replying to a question raised by Che Alias Hamid (PN-Kemaman) during Question and Minister Time in Parliament yesterday. Save them now: Data from the first National Tiger Survey 2016-2020 shows there are fewer than 200 Malayan Tigers left in the wild. — FAIHAN GHANI/The Star

As such, Wan Junaidi informed the House that the Cabinet has approved a nine-point strategic conservation plan for implementation between 2021 and 2030.

It includes the setting up of the National Tiger Conservation Task Force, he said.

“This involves the setting up of the Malayan Tiger Conservation Unit under the Wildlife and National Parks Department, and a wildlife crime bureau under the police,” he said.

Wan Junaidi said the loss of natural habitat due to deforestation and the over-hunting of the Samba Deer are among the reasons for the declining tiger population.He said that connecting fragmented sections of the nation’s Central Forest Spine was also among the measures that could be taken to enlarge the tiger’s habitat.

He said that the moratorium on the hunting of Samba Deer, which ends this November, must be continued as well.

He said it was also crucial for the nation to develop a tiger-breeding programme. 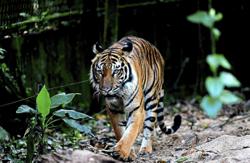 Johor exco man asks MB to 'think twice or just do it' amid talk of snap polls in the state
Ismail Sabri was accepted to read law based on merit, says UM alumni chief
Next of kin of PJPN recipients eligible for cash payouts, says Bukit Aman
Azam Baki did not breach any laws, in control of his trading account, says SC
Negri MB: 25% discount on land premiums to continue this year
Cops say illegals on capsized boat near Pontian paid boatman RM580 each and were promised jobs
Kitingan to appeal for sales tax on Sabah fish exports to be deferred again
Johor exco meeting did not discuss state election, says state exco member
Roaring start: Have a merrier CNY but don’t ignore SOPs, says Dr Wee
Teenager killed in motorcycle-car crash in Iskandar Puteri