MELAKA: A video of a Melaka Gerakan female committee member asking two DAP stalwarts to make her "climax" on stage is not meant to be distasteful, says its state party chief.

Datuk Seri Gan Peng Lam said the video uploaded in the Facebook account of the member was misinterpreted by some as being indecent.

"The member is one of the Melaka election aspirants and explained in her video that she doesn't intend to be vulgar when using the word ‘climax’ when inviting DAP leaders to a debate with her," he said when interviewed on Saturday (Oct 30).

Gan said the party member only suggested inviting DAP secretary-general Lim Guan Eng and Perak DAP chairman Nga Kor Ming for a debate on their achievements when they were in office during the Pakatan Harapan administration.

"She spoke in Mandarin and her intention was only to create friendly banter," he said

The video received brickbats from locals with some chiding Melaka Gerakan for uploading the clip. 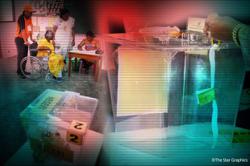