KOTA KINABALU: The Sabah Tourism Board (STB) has defended its decision to appoint former world number one shuttler, Datuk Lee Chong Wei, as its tourism ambassador following brickbats from some Sabahans.

STB chief executive officer Noredah Othman said while she acknowledged those who said that a Sabahan should be hired, added that it is necessary to understand that Lee’s global fame could help boost tourism here.

“We at STB appreciate our local talent and have always engaged with local influencers to promote Sabah tourism, both domestically and globally,” she said in a statement on Thursday (Oct 28).

She said China is Sabah's top tourist source, and STB is continuing its promotional efforts to entice more Chinese tourists to visit the state, especially post-pandemic.

“We believe Lee's position as a respected social and global influencer will help create curiosity as well as interest about the many attractions in Sabah among his followers, especially from China,” Noredah said.

“In the past, the Sabah Tourism, Culture, and Environment Ministry had appointed Sabah-born Malaysian professional golfer Ben Leong as our golfing ambassador. That was at the height of promotions to encourage more golfers to visit Sabah” she added.

Noredah also said that the ministry also engaged renowned Malaysian singer and Kota Belud-born artiste, Gary Chaw, as a tourism ambassador to promote Sabah to his fans in China.

She said for the same reason, the STB views Lee’s appointment as a significant step to boost tourism in this state.

As to how much was spent to get Lee’s agreement to be the ambassador, Noredah said Lee came without any cost to the state.

“Except for costs incurred for logistical arrangements when he visits places of interest for promotional purposes, Lee’s appointment as tourism ambassador comes with no fee,” she said.

“We are thankful and fortunate that the former world number one badminton player has kindly agreed to be our tourism ambassador and for us to ride on his popularity to lure more visitors into Sabah,” added Noredah.

STB looks forward to collaborating with Lee to experience Sabah’s destinations, lifestyle, and culture as a non-local domestic visitor, she said of Lee's appointment, which runs from now until Dec 2022. 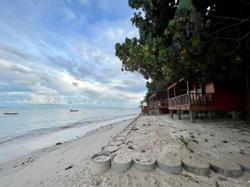