KOTA KINABALU: Malaysia's greatest badminton player Datuk Lee Chong Wei is excited to promote Sabah to the rest of the world, more so after being appointed the state’s tourism ambassador on Wednesday (Oct 27).

The former world no. 1 shuttler said throughout his travels, especially to China and Taiwan for tournaments, he found that many people knew where Sabah was.

“So I am glad to be the tourism ambassador for Sabah, to bring in more visitors here,” Lee said after an appointment ceremony here.

He is also in Sabah to get his Justice of the Peace (JP) award, conferred by the state government in conjunction with head of state Tun Juhar Mahiruddin’s birthday.

Lee said he was excited to bring his family to visit the many islands and places of interest in the Land Below the Wind, as he did not know there were so many to explore before this.

“My wife and children are visiting the islands here now, and I hope to bring them to other places in Sabah again,” he said in thanking the state for his appointment as tourism ambassador.

He will serve as Sabah Tourism ambassador from now until December next year.

Sabah Tourism, Culture and Environment Minister Datuk Jafry Ariffin said in welcoming Lee to Sabah that with the latter’s fame and image as an icon to many in the world, more visitors will learn of Sabah and want to visit this state.

He said Lee was chosen for this role because of his global reputation through his remarkable achievements in the international badminton arena.

“But before he goes around promoting Sabah, we want him to experience for himself what this state has to offer because without self-experience, how is he able to tell others about us?” he said.

Asked if there are plans to set up a Lee Chong Wei badminton academy in Sabah, Jafry said there were none as yet.

“But this can be considered as it is good for our people and it might also become a training centre for tourists,” he said.

He said if these plans materialise, it would boost Sabah’s name and attract more visitors.

On a related matter, Jafry said the state government has decided to give a subsidy or rebate on electricity bills for January to June this year for the tourism sector in Sabah.

Unrated accommodations can enjoy a 30% or RM600 electricity bill rebate, whichever is lower, as well.

These rebates will be disbursed through the Sabah Tourism Board, Jafry added.

Meanwhile, the event on Wednesday saw Lee and Jafry given a belated birthday celebration as both celebrated their birthdays earlier this month; Lee turned 39 on Oct 21 and Jafry turned 58 on Oct 26. 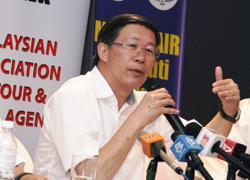