Sabestino Bong, 42, and Haikal Ibrahim Abdullah, 32, pleaded not guilty to the charges read to them before judge Abu Bakar Manat on Thursday (Oct 21).

Wong, who was attached with the Kota Belud narcotics division, was accused of first receiving a RM200 bribe from a drug-related crime suspect on June 6, 2017, as an inducement to not proceed with the case.

He was accused of later receiving another RM100 for the same purpose.

Wong, who is currently based in Lahad Datu, is required to report himself to the Malaysian Anti-Corruption Commission (MACC) office in the district once every two months and to surrender his passport to the court.

Haikal is required to do the same at the MACC office in Sandakan.

Both accused have been warned against contacting or tampering with any of the prosecution witnesses throughout the trial. 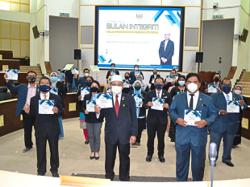