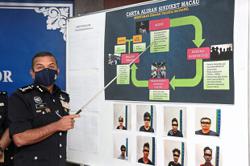 “In the first operation, police arrested six male suspects between the ages of 21 and 43. All of these suspects work as trainers, agents, and operators at the centre,” he said.

Comm Ayob added that police personnel then arrested a 27-year-old man around here at 7pm on the same day.

“The suspect works as the account manager for the syndicate,” he said at a press conference held at the state police headquarters here on Thursday (Oct 21).

Comm Ayob said that the information gained in the investigation led the police to arrest a 33-year-old man at a house in Taman Saga in Kulai at around 2.30pm on Tuesday (Oct 19).

He said the man arrested works as a script-writer for the syndicate and added that the police seized various items including 11 mobile phones, two laptops, a printer, a recorder, a scrip book and five handwritten documents containing scripts to cheat their victims.

Comm Ayob said that they would train new recruits about the tactics they can use to impersonate enforcement officers coming from the police, Customs Department, Bank Negara or the Inland Revenue Board.

“Investigations also found that the new recruits that have memorised the scripts would be sent to several bungalows around here, in Kulai and even to Dubai and Cambodia to cheat Malaysians,” he said.

“Syndicate members are promised a monthly salary of RM3,000 including a 3% commission for every successful scam they are able to get,” added Comm Ayob.

He said individuals who work as runners for the syndicate would also get a salary of RM3,000, including monthly allowances to cover the syndicate's daily expenditure.

Comm Ayob also said that supervisors or trainers acting as agents will get a reward between RM300 and RM800 for every new recruit they rope in.

He added that police were still searching for two more male suspects in their 20’s and 30’s, saying that one of them is the syndicate's head.

Comm Ayob also said that police are investigating the case under Section 420 of the Penal Code for cheating.

He urged the public to always be wary and vigilant when receiving calls from people claiming to represent enforcement agencies or financial institutions to avoid being victims of a Macau scam.

“So far, scam syndicates have cheated victims in Johor with losses amounting to RM1.3mil,” he said, adding that the public should not be easily fooled, especially when it comes to financial transactions.

Comm Ayob said the public can verify the phone number or the bank accounts they received through http://ccid.rmp.gov.my/semakmule/.

The scammer will tell the potential victim that they owe money or has an unpaid fine, often with a very short window to settle the payment or face “dire consequences” and the victims will then be asked to make payments to get them off the hook.