PETALING JAYA: There is no decision yet by Pakatan Harapan member parties on whether to open doors to the four assemblymen who triggered the collapse of the Melaka state government recently, says Datuk Seri Anwar Ibrahim.

"They (the four assemblymen) have not officially submitted applications to join us although they had expressed their intention of being part of Pakatan.

"We will wait as we do not want to preempt things. We will give them time and opportunity to engage with us," he told reporters after chairing a Pakatan Harapan Presidential Council meeting on Wednesday (Oct 20) night.

The four were allegedly given a warm welcome during the event, which did not augur well with DAP who had openly declared that it would object to Norhizam contesting under Pakatan's banner.

Earlier on Tuesday (Oct 19), Norhizam had said that he would defend his seat as a PKR candidate under the Pakatan coalition, claiming that the party's top leadership had accepted him.

In March 2020, Norhizam, who was with DAP at the time, defected from Pakatan with PKR's Rembia assemblyman Datuk Muhammad Jailani Khamis, causing the collapse of the then state government.

On DAP's objection to Norhizam, Anwar said the matter was not discussed in detail during the three-hour meeting.

"We respect DAP's views and their reasons. There has yet to be any application so we did not discuss the matter in detail," he said.

Meanwhile, Anwar said that it was decided that state Pakatan chief Adly Zahari would lead the coalition in the coming state polls under the Pakatan banner.

"We discussed preparation for the polls and the election machinery which will be under the Pakatan name led by Adly," he said.

On a related issue, Anwar said that Pakatan was still mulling whether to file a legal challenge against the dissolution of the Melaka State Legislative Assembly.

On Monday (Oct 18), Adly said that Melaka Pakatan was looking at all legal avenues to stop the state election next month.

He noted that the management of the Melaka Legislative Assembly had failed to issue an official notice of dissolution to all assemblymen accordingly.

The Election Commission had announced that the Melaka state polls will be held on Nov 20 with nomination day falling on Nov 8. 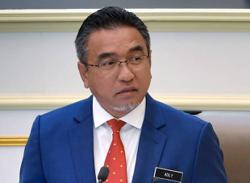