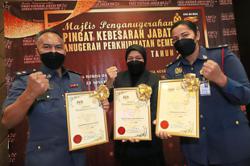 All set: Mohammad Hamdan (centre) looking at an outline of the state department’s preparations for the monsoon season during his visit to the state Fire and Rescue Department’s headquarters in Tabuan Jaya. — ZULAZHAR SHEBLEE/The Star

KUCHING: The Fire and Rescue Department is ready to face the floods in Sarawak with some 1,300 personnel in 36 fire stations being put on standby to respond to any emergency.

Its director-general Datuk Seri Mohammad Hamdan Wahid said the Meteorological Department had forecast rainy weather from this month until March.

“Throughout this period, all agencies involved in managing floods must be fully prepared, especially as the Covid-19 pandemic is still very much an issue.

“We must comply with the standard operating procedures in flood-related operations, such as evacuating and rescuing flood victims,” he said after visiting the state Fire and Rescue Department’s headquarters at Tabuan Jaya here yesterday.

Mohammad Hamdan said logistics would be deployed in forward bases in three zones – Kuching, Sibu and Miri – to manage flood evacuation as well as search-and-rescue operations.

“We have an airbase in Miri with two aircraft for cases in remote areas that are cut off by land and require air assistance,” he said.

Mohammad Hamdan also said the department had identified over 300 areas prone to floods, as well as 77 areas with dangerous slopes and 97 roads at risk of being cut off.

“We will focus on these areas for disaster management, including evacuating victims and saving property.

“At the same time, the department is preparing for the eventuality that other locations not identified as prone to floods may face severe floods,” he said, while advising local communities to cooperate with government agencies.

“We plan to conduct patrols and training exercises for local communities and provide information and warnings on the risk levels and the need to evacuate,” he added.