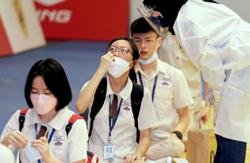 BERA: Any problem faced by those who have yet to be vaccinated against Covid-19 is due to their own attitude, says the Prime Minister as he urges teachers who have yet to get their jabs to do so immediately.

Datuk Seri Ismail Sabri Yaakob’s advice to the teachers came just as the Education Ministry announced that more classes would resume on Nov 1 in line with the transition of some states to Phases Three and Four of the National Recovery Plan (NRP).

He said while the government had no intention of causing hardship to the people, the problems facing those against the Covid-19 vaccine were due to their own attitude.

Although not compulsory, the Covid-19 vaccinations would help make life easier for those who had received the jabs such as travelling, he said.

“Those who have yet to be vaccinated are making life difficult for themselves. It’s not the government that is deliberately making it difficult... that is why I urge those who have yet to receive the vaccine to do so in order for them to also get to enjoy the benefits.

“As human beings, we have a responsibility to help protect others by reducing the risk of infection as well as the severity of the effects of the disease by taking the vaccine,” he said after attending the wearing of rank ceremony from DSP to Superintendent for Bera police chief Mansor Samsudin at the Bera district police headquarters yesterday.

Referring to Health Minister Khairy Jamaluddin’s statement on Saturday that the government would “continue to make life difficult” for those who refuse to be vaccinated, Ismail Sabri said the former was referring to the problems that they would face as the condition for people to be fully inoculated was not only imposed by the Malaysian government but also by other groups and countries.

“For example, only those who are fully vaccinated are allowed to perform the umrah and next year, the haj pilgrimage. This is a condition set by the Saudi Arabian government, which of course makes it difficult for those who are not vaccinated,” he said.

Asked if the condition would be included in the recruitment of new civil servants in the future, he said this was a good suggestion.

“But the matter needs to be looked into thoroughly by the Public Service Department (PSD).

“It may be considered but the PSD has to look into various aspects, including from a legal perspective.

“So far, action can only be taken against those who are already in the service as the deadline for civil servants to take the vaccine is Nov 1,” he said.

Earlier, he said although vaccination was not compulsory for teachers, they were at risk of increasing infections with the resumption of face-to-face teaching and learning sessions.

“For example, primary school teachers who have not been vaccinated are putting their pupils at risk, as well as their fellow teachers. That is why the Education Ministry is firm.

“If we are not vaccinated and our presence can endanger others, then we should take the responsibility to protect our colleagues and, more importantly, the students,” he said.

The Prime Minister said this during the presentation of computers to students in the Bera parliamentary constituency at SMK Bera Bandar 32 here yesterday, according to Bernama.

It was reported on Sept 15 that an estimated 2,500 out of the 500,000 teachers in the country had yet to be vaccinated and that the Education Ministry said it was looking into ways that action could be taken against them.

On Sept 30, the PSD said all 1.1 million civil servants were required to complete their vaccination before Nov 1, failing which those without medical exemption would be subject to disciplinary action.

Mohammad Rosli said 98% of the teachers in Pahang had been vaccinated while 88% of students aged between 12 and 17 had also got their jabs.

He also said 167 students in Pahang lost their parents to Covid-19.