"The reason why the party was recently launched was to state our ideology and direction.

"During the launch, we stated that we are friendly to the government and if we were to get involved in the state polls, we will assist candidates under the ruling coalition," he said when contacted on Monday (Oct 18).

He acknowledged there were strained ties between Umno and Parti Pribumi Bersatu Malaysia (Bersatu), but said these must be mended ahead of the Nov 20 state election.

"PAS, Umno and Bersatu must unite to garner public confidence. Any clashes will be detrimental to the three parties," he said.

Prior to the dissolution of the 28-seat Melaka state assembly, Umno had 13 seats, followed by Bersatu with two. There were also two government-friendly independents.

The Opposition held 11 seats: seven by DAP, and two each by PKR and Parti Amanah Negara.

The state government collapsed after four assemblymen declared they had lost confidence in the leadership of Datuk Seri Sulaiman Md Ali as chief minister.

On Monday, the Election Commission announced that the state election will be held on Nov 20, with nomination day set for Nov 8. 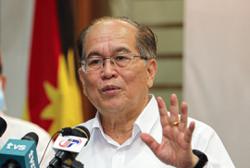