The Parti Pribumi Bersatu Malaysia secretary-general said the Melaka Bersatu chief Datuk Mohd Rafiq Naizamohideen, who is also the state Perikatan chairman, had drawn up strategies to mobilise the party machinery at the grassroots level together with other component parties to face the election.

Hamzah said Bersatu and the Perikatan component parties would intensify the existing outreach programmes in all 28 Melaka state constituencies, including the Gerai Prihatin Rakyat initiative which had received an overwhelming response from the people.

In addition, he said the Bersatu supreme council meeting held yesterday had discussed the party’s preparations to face the Melaka election.

"Bersatu is ready to face the Melaka election with thorough preparations,” he said in a statement on Friday (Oct 15).

The Melaka state assembly was dissolved on Oct 4 after four state assemblymen announced that they had lost confidence in and were withdrawing their support for Chief Minister Datuk Seri Sulaiman Md Ali’s leadership.

The Election Commission (EC) will hold a special meeting on Oct 18 to discuss the implementation of the state election including the date for the issuance of the writ of election, nomination day, polling day and the electoral roll to be used. - Bernama 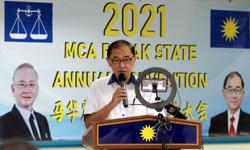