PUTRAJAYA: The Umno supreme council has confirmed that Datuk Seri Idris Haron and Datuk Nor Azman Hassan - who are involved in the Melaka political crisis - have been stripped of their membership.

The confirmation was made at the council’s meeting on Thursday (Oct 14) night, said party secretary-general Datuk Seri Ahmad Maslan (pic).

“The supreme council also discussed preparations to be made to face an election in Melaka.

“The party machinery has been directed to make necessary preparations to face the state election and to put in place standard operating procedure to be set by the Election Commission,” he said in a statement on Friday (Oct 15).

The sacking came following the duo’s involvement in Melaka’s political crisis after they declared to have lost confidence in Melaka Chief Minister Datuk Seri Sulaiman Md Ali and withdrew their support for him.

On Oct 5, the state assembly was dissolved, paving the way for an election to be held within 60 days.

The Election Commission will be meeting on Oct 18 to discuss matters pertaining to the state election.

On other matters, Ahmad said the supreme council supports the government’s decision to set up a special committee to prove the death of fireman Muhammad Adib Mohd Kassim.

“The supreme council also supports the government’s decision to review laws relating to the Pulau Batu Puteh case and the setting up of a special task force to investigate allegations by former attorney general Tommy Thomas,” he said. 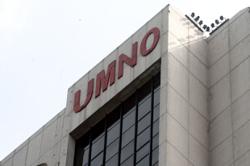