MELAKA: An official car of Pengkalan Batu assemblyman Datuk Norhizam Hassan Baktee has been seized by the police.

He added that his men had confiscated the car after a police report was lodged by the State Secretary’s office.

“We have opened an investigation paper under Section 403 of the Penal Code and seized the black Toyota Camry with the registration number MAL 3, a fuel card as well as other items belonging to the state government inside the car.

“We asked Norhizam to come to the police headquarters to record his statement.

“But, he gave the excuse that he was not in the state.

“The police will record his statement soon over the case,” he said yesterday.

Abdul Majid said that a preliminary investigation found that the Melaka senior assistant state secretary had issued an order on Oct 5 to Norhizam’s special officer for the car to be returned.

He also said the police has also summoned five individuals to assist in the investigation.

He added that the Commercial Crime Investigation Department from the state police contingent headquarters has opened an investigation paper under Section 403 of the Penal Code for alleged dishonest misappropriation of property.

“He has resigned and is no longer part of the caretaker state government. It’s fair for him to return whatever assets were allocated to him previously,” Sulaiman said on Saturday. 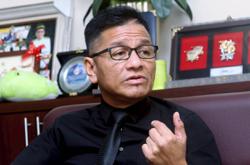