“I discussed this with the Umno party president, Prime Minister and other party leaders on Wednesday night and informed them of my decision to withdraw as a candidate for the post,” he told a press conference in Parliament yesterday.

The Umno secretary-general said that he made the decision so he could devote more time to party matters.

“I have met Dewan Rakyat Speaker Datuk Azhar Azizan Harun to inform him of my decision,” he said.

He added that he made the announcement yesterday to allow Prime Minister Datuk Seri Ismail Sabri Yaakob to nominate replacement candidates before the next Parliament meeting on Oct 25.

Ahmad insisted those nominated to replace him should be from Umno, and said one or two others had been named. 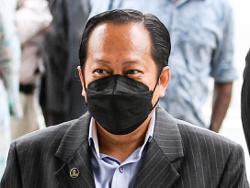