MACC: Rule nothing out

GEORGE TOWN: The death of high-profile property developer Datuk Ewe Swee Kheng must be investigated from all angles because he was to be a prosecution witness in the graft trial of Lim Guan Eng, said the Malaysian Anti-Corruption Commission (MACC).

“Investigation into this case must be done thoroughly and nothing should be ruled out, including foul play,” a source in MACC said yesterday.

The source said that MACC was “left in shock” by Ewe’s death because of his role as a witness in the trial.

“Now, one of our witnesses is gone. Of course the news shocked us,” the source said.

The hearing resumes on Nov 1 and it is learnt that Ewe was to testify as the 15th prosecution witness on Nov 29 and 30.

At 5am yesterday, a security guard at Ewe’s condominium found his body floating in a swimming pool.

Ewe, 53, was reported to have fallen from his duplex penthouse on the 17th floor of the condominium in Jalan Kelawei at about 2am, according to a report by Sin Chew Daily.

George Town OCPD Asst Comm Soffian Santong confirmed that the body was found after police received an emergency call at 5am, but declined to reveal further details.

Bernama quoted ACP Soffian as stating that no criminal elements were detected and the case has been classified as sudden death.

In January, 2018, MACC arrested Ewe along with a few other people to assist in investigations into allegations against Lim.

Ewe was released after a few days.

Ewe’s flagship company, Ewein Berhad, had formally clarified that the company and its subsidiaries were not involved in the undersea tunnel project.

The company, in 2018, stressed that one of its subsidiaries, Ewein Land Sdn Bhd, was merely appointed as a joint-venture partner of Consortium Zenith Construction (CZC) to develop land alienated to the consortium by the state government for the feasibility study and detailed design of three paired roads to be built on Penang island.

In July last year, Ewein announced the termination of another joint venture between its subsidiary and CZC involving the development of a different piece of land.

In its Bursa Malaysia filing, Ewein stated that the termination took place because it was unable to obtain approval from its shareholders within the stipulated time.

Ewe is survived by his wife, a daughter and son. 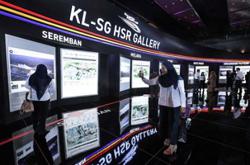