Over 100 ships detained by Johor MMEA for anchoring illegally 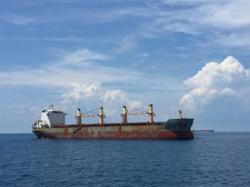 JOHOR BARU: More than a hundred vessels have been detained by the Malaysian Maritime Enforcement Agency (MMEA) in eastern Johor for anchoring illegally, and a majority of them were detected during Ops Jangkar Haram.

“The area is a known hotspot for such illegal activity as it has a depth of 60m, which is suitable for ships to anchor.

“Eastern Johor waters is part of a busy global trade route as it connects the east and west with an average of 80,000 vessels passing through the route yearly,” he said yesterday.

In the latest case last Friday, MMEA spotted and detained two vessels for carrying out illegal oil transfer and anchoring.

The vessels were detained at 1.30pm 22 nautical miles north east of Tanjung Siang.

“One of the vessels, a Mongolian-registered ship with eight Indonesian crewmen aged 23 to 66, had been fined RM50,000 for anchoring illegally in Malaysian waters on Sept 22.

“The other vessel is registered in Panama and had 25 crewmen from Indonesia, Ukraine, Georgia and Russia aged between 23 and 53,” he added.

Nurul Hizam said since January, MMEA has detained 101 vessels for various offences under the Merchant Shipping Ordinance 1952, with 83 of them detained under Ops Jangkar Haram.

“The amount of fines and compounds collected through the Merchant Shipping Ordinance 1952 is RM2.5mil, with RM1.3mil coming from Ops Jangkar Haram,” he added.

This is the most number of cases recorded by Johor MMEA, which has broken the record of 93 cases in 2010.

“Singapore-registered vessels top the list for such offences in our waters, with 30, followed by Indonesian (12) and Malaysian vessels (nine).

“Some of these vessels claimed they were unaware they were in Malaysian waters when they anchored, and did not know about our maritime laws. This is a lame excuse,” he added.

Nurul Hizam said vessels that anchor in Malaysian waters without informing the Marine Department committed a serious offence as they want to avoid paying taxes.

He paid tribute to his men for their dedication and hard work in safeguarding Malaysia’s sovereignty, especially with the ongoing Covid-19 pandemic.

“Some 360 of my officers and personnel had to be put under quarantine after they came into close contact with foreign suspects that we detained. One hundred and twenty of them tested positive, and we lost two officers to Covid-19 on Aug 16 and Sept 17.

“We are following the SOP set by the Health Ministry closely, where all of our men, including suspects that were brought in, go through a health screening process,” he said.

MMEA will continue to work closely with the Marine Department to stamp out illegal anchoring in Johor waters.