Former patients thankful for care given

PETALING JAYA: Former patients of Covid-19 remain immensely thankful of the services provided by medical frontliners who have been shouldering the heavy and relentless workload during the pandemic.

Among them is Zunaidah Ibrahim, who was treated for mild symptoms at Hospital Sungai Buloh with her four-year-old daughter last month.

The 30-year-old customer service executive said having both herself and young daughter test positive for Covid-19 compounded her worries as she was pregnant at the time.

She was relieved that they were well cared for by the medical staff.

“We felt comfortable at the hospital with its friendly and helpful staff. When they brought us food and snacks they would often pen something encouraging on the packaging.

“Once we received brownies with a ‘GWS’ (get well soon) message,” she recalled.

As hospitalisation eases in the country after recent months of intensively battling a high infection rate, Zunaidah said she hoped the medical frontliners would stay strong, and “they deserve a very long rest”.

Yusuf, from Kuala Lumpur, was admitted for treatment at a centre in the city after being infected.

“The staff were very helpful and supportive,” the 27-year old said.

He added that the whole country owes the frontliners a debt of gratitude for their tireless efforts in fighting the pandemic.

“Even as they fought for their basic rights, they never neglected their duties. They carried on, putting the people’s needs above their own even as some lost their lives.

“For those who are still fighting, keep going. You have all our prayers and support. We can see a ray of light at the end of the tunnel already!” Yusuf added gratefully.

A manager from Petaling Jaya, who wished to be known only as Lee, said his terrifying experience of being admitted to hospital after contracting the coronavirus was soothed by the friendly medical staff.

The 38-year-old said he required oxygen during his time in the ward.

“The nurses did more than just constantly monitor our health condition.

“They would also readily offer words of encouragement. It helped me strive to be healthy again,” he said.

Lee applauded the medical frontliners for their courage and spirit to serve the people and hoped they would be rewarded for their work. 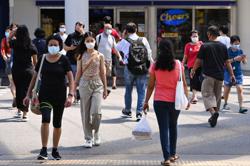