KUALA TERENGGANU (Bernama): After the prisoner and Orang Asli groups, the Terengganu government has extended the vaccination programme to the homeless in the state on Sunday (Sept 26) night.

"The response received from the group was very encouraging as they had been briefed on the importance of getting the vaccine by several non-governmental organisations (NGOs) that had been in close contact with them.

"The vaccine administration went smoothly, except for the few who fled, probably because they were not comfortable seeing so many strangers. We will track them down so that they will not be left behind in the vaccine rollout," he told reporters after checking on the vaccination process for the homeless on Sunday.

To date, it is estimated that there are 50 homeless people in the Kuala Terengganu district.

Meanwhile, Mohd Zulkifli Mohd Rani, 50, from Kerteh, Kemaman said he was thankful that the government has not sidelined the group in the vaccination programme.

"I am aware of the vaccine after watching television at the restaurants near this bus stop... I was not afraid because the NGO members who had been helping us have reminded us to cooperate with the doctors.

"Anyway, the process did not take long, it was painless and over within minutes. The doctor too was kind to us just like the NGOs who have been providing us with food and other needs,” he said.- Bernama 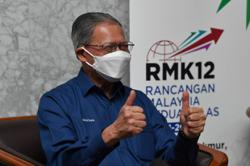