Meeting the people: Ismail Sabri speaking to recipients of the housing initiative at the virtual launch of Rumah Ikram Malaysia. — AZLINA ABDULLAH/The Star

PUTRAJAYA: Vulnerable groups and youth will be given assistance to own affordable and quality homes, says the Prime Minister.

Datuk Seri Ismail Sabri Yaakob said details of this initiative would be in the 12th Malaysia Plan and Budget 2022 that would be tabled soon.

He said the government was aware that the current economic situation impacted the people and that one of the issues affecting them was housing.

“Housing agenda will remain the main focus of this government, particularly in preparing affordable housing for the Malaysian Family.

“The Housing and Local Government Ministry will look at strategic planning and implementation of housing programmes, not just to build these homes quickly but make them affordable to the people,” he said at the launch of the Malaysian Family Housing Initiative or Rumah Ikram programme.

Rumah Ikram is an initiative by the ministry to assist those affected by the Covid-19 pandemic, such as loss of employment and income, and whose salaries were significantly reduced, affecting their ability to pay rent.

About 1,000 units of PPR flats at 11 areas nationwide under the ministry are being offered to rent at RM124 a month.

The Prime Minister relayed other good news to Rumah Ikram programme participants in conjunction with the launch.

“After discussing with minister Datuk Seri Reezal and local state authorities, this initiative will now have 2,000 units up for offer, and this will benefit at least 10,000 households.

“To further ease the burden of the programme participants, they will be exempted from paying rent for six months, beginning from the date that house keys are handed over to them,” he announced.

The government will bear this rent exemption involving an allocation of RM3mil.

“We hope heads of household can use this rent waiver to meet their families’ economic needs,” he said.

Another good news delivered by the Prime Minister is that existing residents of PPR flats, under this ministry, will not have to pay rent until the end of 2022 and this will benefit 10,000 heads of household or 50,000 residents.

“This is part of our efforts to help our Malaysian Family who are in need. The government remains committed to giving its best for the people,” said Ismail Sabri.​

The 12th Malaysia Plan and Budget 2022 will outline approaches and ways forward to be undertaken by the government where the priority will be the well-being of the Malaysian Family. 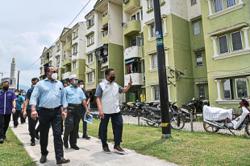