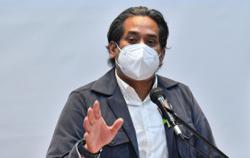 PUTRAJAYA: Malaysia is in talks with a vaccine maker to procure vaccines meant for children under the age of 12, says Khairy Jamaluddin. Without naming the company, the Health Minister said the vaccine maker was in the midst of submitting clinical data on the vaccine that could be administered to children.

“Now that the ministry is no longer pursuing ‘herd immunity’, our aim is to vaccinate as many people in our population.

“After vaccinating our adult population, we have started with teenagers.

“I have had meetings with a company that produces the vaccine that recently came up with early clinical data on vaccination for children aged below 12.

“And we are negotiating to procure those vaccines,” said Khairy at a press conference here.

Currently, Malaysia has started to vaccinate adolescents aged between 12 and 17, after more than 80% of its adult population have been fully vaccinated.

Meanwhile, Khairy said the ministry was currently developing guidelines on third doses and booster shots for Covid-19 vaccines, which will be tabled in the next Covid-19 Vaccine Supply Access Guarantee Special Committee (JKJAV) meeting.

“I am confident that we can start giving the third dose first, and then followed by the booster shots starting from next month once we get the views and clinical guidelines from experts,” he said.

He added that Pfizer had made a registration with the National Pharmaceutical Regulatory Agency for its dossier on third and booster shots.

“We will approve it as soon as possible,” he said.

Khairy explained that there was a distinction between a booster shot and the third dose of the Covid-19 vaccine.

“The third dose is given to those who may not have gotten the level of protection they need from the first two doses.

“And they require a third dose to achieve an optimum immune response.

“Booster shots are given to those who have enough immune response after receiving two doses of vaccine, but its response is slowly going down,” he added.

The Health Ministry said target groups would get priority for the third dose of the Covid-19 vaccine starting next month.

“The priority of giving this third dose will be focused on high-risk groups first, such as health frontline members, immuno-compromised patients, the elderly with comorbidities and individuals living or working in long-term care facilities,” he said.

On another matter, Khairy has called on the World Health Organisation (WHO) and the United Nations to intervene in the vaccine passport issue where certain countries were “discriminatory” on vaccine types.

“There are some countries stipulating that only individuals who receive certain vaccines will be exempted from performing the Covid-19 tests before departure, undergoing quarantine upon arrival in the country, and so on.

“This should not happen because it is important for us to understand that vaccines protect individuals from the risk of getting more severe infections as well as reduce the symptoms of the disease.

“By discriminating against the vaccine type, this will defeat the purpose of having the vaccines and administering them to the population.

“We would like to get WHO to come up with a position on the discrimination of vaccines by certain countries.

“Our view is that if the vaccines are listed by WHO, they should be recognised by all countries,” he said.

“We would like to get WHO to come up with a position on the discrimination of vaccines by certain countries.

“Our view is that if the vaccines are listed by WHO, they should be recognised by all countries,” he said.

The four groups are medical frontliners, the immunocompromised, the elderly with comorbidities and individuals in long-term healthcare facilities.