KANGAR (Bernama): The 3G network coverage in the country will be shut down by the end of the year, says Deputy Minister of Communications and Multimedia Datuk Zahidi Zainul Abidin (pic).

He said the 3G network would be shut down in stages while the 4G network coverage would also be enhanced.

"Only the 4G and 2G networks will remain, because 2G is still important for telephone use," he told Bernama during his working visit to the Malaysian Communications and Multimedia Commission (MCMC) Perlis here Saturday (Sept 25).

He said the 5G rollout in Perlis by Digital Nasional Berhad (DNB) would be implemented from 2023 to 2026 involving 59 locations, and the matter had been discussed with the Perlis government on Aug 23, 2021.

"We discussed with MCMC on areas in Perlis that have not yet received coverage, and we will discuss with the respective elected representatives to identify areas that do not have network coverage, and they would be completed in stages,” he said.

The coverage of the fourth generation (4G) network nationwide has now reached 94%.

Zahidi said the country was expected to be able to achieve full 4G coverage within two years and efforts were being made by the government together with the relevant agencies.

"Once all areas have reached 4G, we will try to upgrade the coverage to the 5G network," he told reporters when attending the Malaysian Family Community Programme at the Ottoman Mosque today.

Zahidi, who is Padang Besar Member of Parliament, said the 4G achievement was in line with the 96.9% coverage target by the end of 2022 under the National Digital Network (Jendela) initiative which was launched in 2020.

He said various issues had to be faced in an effort to improve connectivity such as in the construction of transmitter towers.

On the construction of transmitter towers, he said, it involved many processes, including discussions with landowners and also the state government for the site.

"We hope the people will be patient and give some time to the government to work to improve Internet access, especially in rural areas," he said.

He also advised the public not to spread or be easily influenced by false news. - Bernama 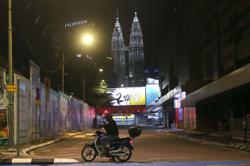