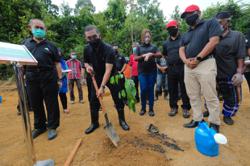 THE massive flash flood which swept away three people near Gunung Jerai in Yan, Kedah, was an act of God and not caused by illegal logging, says Datuk Seri Takiyuddin Hassan.

The Energy and Natural Resources Minister expressed regret over the incident and described it as a natural disaster.

“It is an act of God,” he said in reply to a supplementary question from Sabri Azit (PAS-Jerai) during Question Time, who asked about the steps taken by the ministry to make the forest more sustainable along the roads heading towards the peak of Gunung Jerai which was destroyed by the recent flash flood.

Opposition Leader Datuk Seri Anwar Ibrahim (PKR-Port Dickson) interjected, saying: “We cannot blame it on God for what is due to the greed of people.

“This is the same as a former works minister who would blame such incidents as an act of God.

“How do you know it is an act of God when it is humans who are greedy and destroy (nature) by logging?” To this, Takiyuddin said the area was under the Jerai Geopark which was proclaimed a national geopark in conjunction with the coronation of the 29th Sultan of Kedah Sultan Sallehuddin Ibni Almarhum Sultan Badlishah on Oct 22, 2018.

“Based on the status as a geopark, there are no logging activities at all.

“I want to state here clearly that Jerai is situated under the Ulu Muda forest, covering the size of an estimated 106,000ha.

“I received confirmation from the Kedah government that since the last three years, it had been decided there should be no new logging licences issued.

“Since 2014, until 2019, a total of 25,000ha had been approved and given licence for logging in various parts of the permanent reserve forests in Kedah.

“But for the Ulu Muda permanent reserve forest, there are no logging activities,” he said.

Takiyuddin said that during his site visit at the flashflood area, the water rush phenomenon had uprooted the trees along with its roots.

“The water brought along the trees with its roots. So there is no logging in the Jerai area. This is why I said it is an act of God,” he added.

He noted that the ministry would embark on a forest restoration programme with an allocation of RM75mil.