According to a statement from the Chief Minister's Department, Ismail Sabri said people-centric projects would be given priority such as schools, infrastructure and amenities.

He also told the state that consideration would be given to allocate more funds to Sabah, especially for flood-hit and high-risk areas including Penampang, which has been hit many times by flash floods and landslides.

Ismail Sabri said this during a briefing after arriving in Sabah for a one-day official visit and to launch the Malaysia Day event at the Sabah International Convention Center (SICC) on Thursday (Sept 16) evening.

Following the briefing, Ismail Sabri presented a mock cheque of RM18,241,250 as the federal government's contribution through the National Disaster Management Agency (NADMA) to the Chief Minister.

Earlier, Ismail arrived at the Kota Kinabalu International Airport at about 11.10am.

This marks Ismail Sabri's first visit to the state since taking office as Prime Minister on Aug 21. 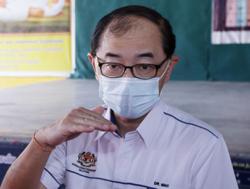