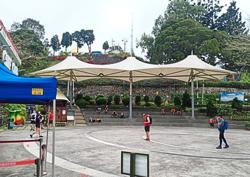 It was listed as a Unesco biosphere reserve under Unesco’s Programme on Man and the Biosphere (MAB).

The announcement was made after the 33rd Session of the Man and the Biosphere Programme International Coordinating Council held in Abuja, Nigeria, from Sept 13 until Friday (Sept 17).

The PHBR spans an area of 12,481ha and encompasses terrestrial, marine and coastal ecosystems.

“We hope to engage in knowledge sharing with members of the World Network of Biosphere Reserves to integrate best practices in line with the objectives of the Penang state government and the MAB Programme," he added.

According to Unesco, Cheok said, biosphere reserves are "learning places for sustainable development".

The MAB programme was launched by Unesco in 1971 and aims to promote environmentally sustainable approaches to economic development that are both socially and culturally relevant.

There are now 714 biosphere reserves across 129 countries worldwide, including 21 transboundary sites under the World Network of Biosphere Reserves.

Cheok said at PHBR, its core area of 5,757ha is a protected site where biodiversity conservation works, research and educational activities are carried out.

The transition area covers terrestrial and marine areas that are not under the core area or buffer zone.

“It paves the way for Penang Hill and its surrounding areas to become a world-class learning site to explore and illustrate methods of conservation and sustainable development.

“We hope to generate innovative and green approaches to bring us closer to the Penang2030 vision.

“We hope to make Penang a shining example in conservation works and sustainable economic development in Malaysia as well,” he said during an online conference today (Sept 16).

State tourism and creative economy committee chairman Yeoh Soon Hin said the PHBR will open up a range of opportunities for the tourism industry.

“Visitors can enjoy and learn about the natural landscapes and historic structures scattered all over the island from Penang Hill to Teluk Bahang.

“This can instil a deeper sense of appreciation towards our natural gems and to invoke awareness on the importance of conserving these treasures,” he said.

The application to have Penang Hill and its surrounding areas listed as a Unesco biosphere reserve was submitted on Sept 29 last year.

Cheok said this came about after four years of research and a comprehensive submission process.