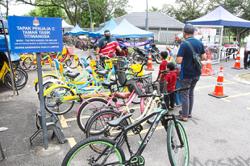 Wangsa Maju OCPD Supt Ashari Abu Samah said the compliance operation task force would be tasked to increase inspections as the standard operating procedures (SOP) have been relaxed given Klang Valley had moved to Phase 2 of the National Recovery Plan (NRP).

"We are aware of the influx of visitors at public spots such as Tasik Titiwangsa and Tasik Ampang Hilir.

"Our compliance operation task force will make more rounds at such areas to ensure that the people follow SOPs," he said at a press conference after witnessing the destruction of items seized from anti-gambling operations in the district on Wednesday (Sept 15).

Supt Ashari said police would at first advise the public to adhere to the SOP but take stern action if they failed to comply.

"The items, which are worth about RM45,000, were seized during raids on illegal gambling operations in the district from 2014 until 2020.

"We have to destroy seized items for cases that have been closed to make space for other seized items, as gambling raids are conducted almost daily," he said.

Supt Ashari said police expected illegal gambling syndicates to be much more active as Klang Valley moved to Phase 2 of the NRP.

"We will increase the raids to ensure that the district is free of illegal gambling.

"While certain syndicates have made their services available via mobile phones or tablets, avid gamblers still prefer to play at their gambling dens," he said.

"We need the cooperation of the public in the war against illegal gambling.

"We urge the public to not be involved in illegal gambling as it will only lead to misery," he said. 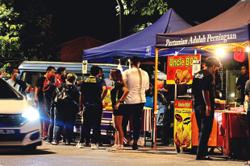