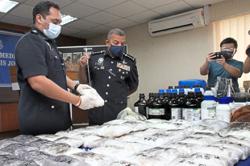 NIBONG TEBAL (Bernama): Police have uncovered a drug processing laboratory at a luxury condominium in Bukit Tambun, Simpang Ampat, arrested seven men and seized drugs worth RM184,335 in a series of raids here.

"They were busy processing drugs and were surprised by the raiding party. Checks showed that the condominium was used as a drug lab.

"Police seized 13.6kg of heroin and 7kg of caffeine powder, all worth RM184,335, as well as drug processing equipment and some liquid chemicals,” he told a press conference here on Tuesday (Sept 14).

In follow-up operations, police nabbed five men aged between 21 and 50, believed to be members of the drug processing and trafficking syndicate, at three locations in Seberang Perai Selatan.

ACP Mustafa said the 34-year-old leader of the syndicate was among those arrested in the raids.

He was believed to have used his cooking gas distribution business as a front to hide his drug activities by living a high life, he said.

"The seized drugs were meant for distribution in the northern region and could feed the habit of 67,900 addicts," he added.

He said police also seized six luxury cars, including two BMWs and a Mercedes Benz, jewellery, and money in their accounts, all worth about RM266,000.

All the suspects, who tested positive for drugs and had criminal records, have been remanded for seven days for investigation under Section 39B of the Dangerous Drugs Act 1952, he added.- Bernama