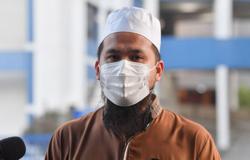 He said the police had also tried to contact the duo through email and social media platforms, but to no avail.

"Efforts are also being made to reach Caprice on the contact number uploaded by Caprice on his Instagram account and we hope that he will give his full cooperation,” he told Bernama.

On July 21, Ebit Lew lodged a police report on various allegations levelled against him by several individuals on social media.

The case is being investigated under Section 500 and 504 of the Penal Code and Section 233 of the Communication and Multimedia Act 1998. - Bernama