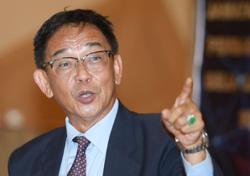 PETALING JAYA: Datuk Seri Najib Razak has criticised Tan Sri Muhyiddin Yassin for his bipartisan offer to the Opposition, saying it was the “most brazen and unprecedented moment in Malaysian history, political corruption on national television.”

He said that (it) goes to show Muhyiddin has no moral fibre and no ethical values in him to lead the country.

“He has brought shame and disrepute to the office of the Prime Minister,” the Pekan MP added yesterday.

Najib said it was ridiculous for Muhyiddin to say that the national vaccination programme will stop and Malaysia would not reach herd immunity without him.

“Why would he lie to the nation like that?

“The money doesn’t come from his pocket and neither is he the one who is injecting the patients.

“The government and the programme will continue as it is under our civil service,” he said, adding that “changing the head does not mean that the country stops functioning”.

“Biden replacing Trump, and PM (Shinzo) Abe from Japan being replaced late last year and this year shows that a country will do just fine,” he said.

Najib noted that the country deserves new leadership that “did not make and continue to make fatal mistakes that eventually made our country the number one most affected in the world for new Covid-19 cases and deaths per capita.

He said failure to do so would have significant legal repercussions on government decisions.

Mohamad, who is also Rantau assemblyman, said the legitimacy and constitutionality of every decision made by the executive could be challenged in future if Muhyiddin does not step down.

“He has clearly lost his legitimacy after losing the support of the majority,” said Mohamad.

“If he doesn’t step down immediately, this will put the government in a difficult position, exposing it to a multitude of legal disputes and risk of financial loss,” he said.

Mohamad said the executive has to take the right action and uphold the Constitution and prevent the nation from continuing to spiral in the midst of this constitutional disarray.

He said the Prime Minister seems to be the only one defending a position that can “no longer be defended”.

“He should know that the Constitution is non-negotiable,” he said.

He added that nothing is more important to a prime minister than fulfilling his responsibilities within the limits and mandate provided by the Constitution.

Warisan president Datuk Seri Mohd Shafie Apdal, meanwhile, said the question of who from among the Opposition MPs can succeed Muhyiddin is for the King to decide.

“It is not for Muhyiddin to say or decide that there is no MP in the current Parliament who has the majority and can be sworn in as prime minister.

“Muhyiddin should not be finding excuses or assuming power over who could or could not be the next prime minister as it is not his duty,” he said.

Shafie said it is clear that the Perikatan Nasional government has lost its majority and Muhyiddin must honourably resign instead of trying to stay on by making offers to the opposition through an all-party cooperation.

“The sincerity of the offer by Perikatan is being questioned not only by Opposition leaders but also the people.

“Billions of ringgit have been allocated for Covid-19 measures but people are asking where it has all gone,” he said, adding that there was no transparency.

“People no longer trust the government of the day. Such measures should have earned the trust of the people,” he said.

As such, Shafie said, the Opposition’s decision not to take the Perikatan offer of all-party cooperation was due to the lack of trust in Perikatan.

He said Warisan and some Opposition parties in Sabah had offered to work with the Federal Government under Perikatan as early as last year, but they were too proud and did not bother.

In fact, Perikatan moved to topple the state government led by Warisan Plus in July 2020 through defections of assemblymen, he said, adding that a snap state election was forced to be held in September amid the Covid-19.