KUALA LUMPUR (Bernama): Police here are tracking down several individuals in connection with a viral video showing a group of men involved in a fight using weapons in an incident believed to have taken place in a residential area at Sri Timah flat in Balakong.

Kajang district police chief ACP Mohd Zaid Hassan said a police officer had seen the video clip, lasting one minute and 32 seconds, on social media and lodged a report on the matter at 9 am today.

"In the video, a group of men were fighting using weapons believed to be steel bars or sharp weapons. The motive behind the incident is still under investigation and police are tracking down all suspects,” he said in a statement on Tuesday (Aug 10) night.

He added that the case is being investigated under Sections 148 and 269 of the Penal Code.

Mohd Zaid also urged people who have information on the incident to contact the nearest police station or investigating officer Inspector Norhafiza Borhan at 03-8911 4222. -Bernama 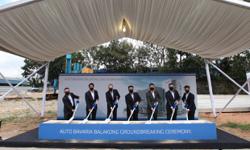