PETALING JAYA: It has been proven that the Delta variant of the SARS-CoV-2 virus strain is much more infectious but a health expert says there is insufficient evidence to suggest that the increasing number of deaths in the country is due to it.Universiti Putra Malaysia’s consultant clinical microbiologist Prof Dr Zamberi Sekawi said the Delta variant was more infectious with the high virus load found in an infected individual.

“This gives it more ability to infect more hosts. If it infects more hosts, naturally there will be more people who would be sick and the healthcare system will be overwhelmed and the quality of care will be lower too.

“So it is difficult to say that the increase in the number of deaths is due to the virus itself. It could be due to the healthcare system that is already overwhelmed with too many patients that the doctors are not able to treat them.

“There is also the possibility where the patients come in late (to be treated) because they are asymptomatic so they think that they are fine but in fact they end up succumbing to the virus as their condition has already deteriorated,” he said.

A wire report stated that a study in China found that people infected with the Delta variant carried 1,000 times more virus load in their noses compared with the original SARS-CoV-2 virus strain.

With the high infectivity rate of the virus, Dr Zamberi advised Malaysians to minimise human-to-human interaction.

“Whatever that is recommended by the Health Ministry is still valid. People need to wear their face mask, practise physical distancing, avoid crowded areas, maintain good ventilation in the office or factory, and more importantly get themselves vaccinated,” he said.

The Malaysian Society of Infectious Diseases and Chemotherapy president also refuted a viral message claiming that the Delta variant mainly returned a negative test result in the RT-PCR test and that it could only be detected through a CT-scan.

“CT-scans do not detect viruses, they can detect pneumonia (lung infections) but can’t tell which bacteria or virus is causing it,” he said, adding that the Delta virus loads being higher than other variants made it easier to be detected by the RT-PCR test.

Dr Zamberi and Dr Jamal agreed that there were no differences in symptoms between variants, with the former saying those infected with the Delta variant could show symptoms such as cough and fever, among others.

On whether the Delta variant was airborne, Dr Zamberi said based on circumstantial evidence it was but said the virus could also spread through droplets.

The Delta variant is fuelling a new wave of Covid-19 infections around the world. 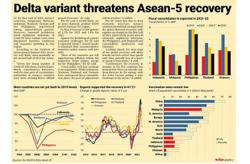