A DIPLOMAT asked me about the #Lawan (fight) protest played out on the streets of Kuala Lumpur on Saturday (July 31).

The street protest was a youth movement calling for the Prime Minister and his Cabinet to resign.

I explained that protest was fundamental to a healthy and vibrant democracy. Even Tan Sri Muhyiddin Yassin, when he was with the Opposition, participated in the Bersih 5 street protest against the Barisan Nasional government in 2016.

But I noted that the protest might not be "healthy" with the daily Covid-19 numbers in Klang Valley in four digits.

I also pointed out that Saturday's protest was not the key "P" in bringing down the Prime Minister.

The 3Ps to watch in Malaysian realpolitik are Palace, Parliament and Pertiwi (or Pahang).

The King is the kingmaker.

For example, when Tun Dr Mahathir Mohamad abruptly quit as Prime Minister in 2020, the Yang diPertuan Agong - in two rounds of meeting MPs and party leaders - found that Muhyiddin had the majority support of the Dewan Rakyat and was qualified to be appointed as the eighth prime minister.

If this week the King announced that he wants to meet heads of political parties like what he did in June this year, it would cause a political ripple.

It is where the PM's majority can be tested. So far, Speaker Datuk Azhar Azizan Harun has not expedited the tabling of a no-confidence motion against Muhyiddin.

The Opposition MPs, however, have several ways to symbolically show that they have the numbers. One is by showing that there are more MPs on the Opposition bench than the government side.

However, Umno MPs, who have claimed that they no longer support Muhyiddin, have not done so - apart from Gua Musang MP Tengku Razaleigh Hamzah.

Even with Razaleigh crossing the floor to sit on the independent block, 114 MPs are with the Prime Minister and 106 MPs against him.

The Umno vice-president is now the Umno leader rallying his party MPs to be with Muhyiddin, the Parti Pribumi Bersatu Malaysia president.

In a plot within a plot, an Umno powerbroker from Pahang, a state the Bera MP Ismail Sabri is from, is believed to be behind him.

As long as less than five Umno MPs do not officially declare they have pulled their support for the Prime Minister, Muhyiddin has the numbers.

The diplomat also asked about Opposition leader Datuk Seri Anwar Ibrahim's claim during a street protest on Monday that "with the 107 MPs here today, along with them (MPs who no longer support them), the government has been toppled."

I explained that the PKR president was playing another "P" - perception.

Politicians create the perception to shape public opinion even though they don't have a "strong, formidable, convincing" majority. 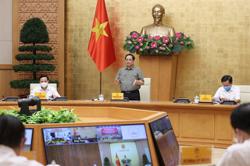