KLANG: A total of 19 foreigners who attempted to leave the country illegally in a boat, were detained some 2.5 nautical miles off Sungai Serdang Besar in Kapar here.

Selangor Malaysian Maritime Enforcement Agency (MMEA) director Maritime Captain Mohd Rosli Kassim said his men spotted the boat at about 1am on Monday (Aug 2), and it was heading towards the sea border of Malaysia-Indonesia.

"The boat's captain tried to ram the patrol boat in a bid to escape.

"However, it caused the boat ferrying the foreigners to sink and all occupants ended up in the sea," he said when contacted on Tuesday (Aug 3).

All the foreigners were rescued, while the MMEA's patrol boat suffered some damages but no one was hurt, he added.

"The 19 foreigners consisted of 18 passengers and the captain.

"We detained 18 Indonesians and a Pakistani national aged between 20 and 45," he said.

Twelve of the foreigners detained failed to produce any valid travel document while seven others had passports, Mohd Rosli said.

"We will investigate the matter further," he said. 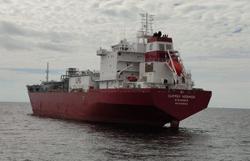